I’m going to be honest, when I first saw the cover of the June issue of Vogue, I wasn’t sure about it. I loved the colours due to the contrast between the blue and the white typography, however something was lacking from the cover. It just didn’t seem very “Vogue”, if that makes any sense.

However one aspect of the cover that made this issue a little more special to me, was the fact that I owned the gold belt that Alexa Chung wore with her Michael Kors look. I actually received this incredibly ostentatious belt from my Grandma who used to wear it with a bright red kaftan, as according to my mother. Unfortunately I have found it very difficult to wear, only managing to make it work when wearing fancy-dress as a pirate. However I have kept it all this time as it is an extremely unique and interesting piece. 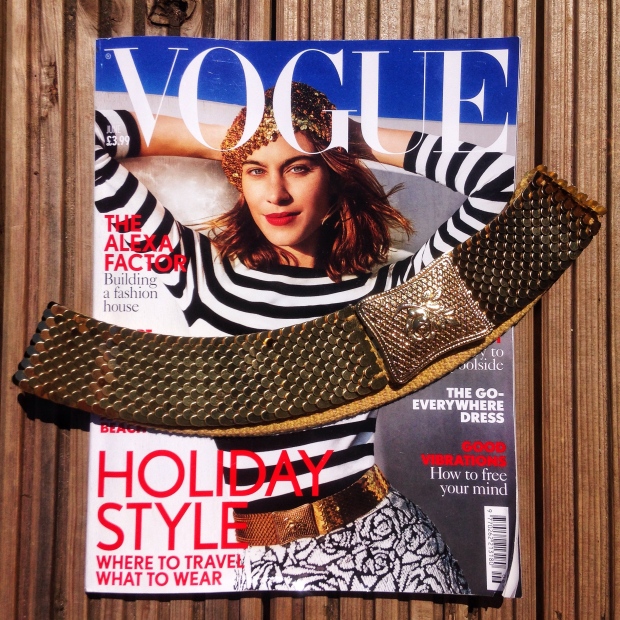 Pairing the belt with a Michael Kors Collection striped viscose sweater, sequinned tulle midi-skirt and a vintage beret, the entire cover look came to £3,307 in total, however I feel this styling was not worth that amount of money. Revealingly, Lucinda Chambers (who was the fashion editor for this look) recently confessed that she also disliked the cover. This exposé came about in an interview between Chambers and Fashion journal Vestoj, where she felt encouraged to be honest about her role in the renowned publication, perhaps prompted after she was allegedly sacked by new Vogue editor-in-chief, Edward Enninful. She admitted that her choice of styling was influenced by money, as quoted below:

“Oh I know they weren’t all good – some were crappy. The June cover with Alexa Chung in a stupid Michael Kors T-shirt is crap. He’s a big advertiser so I knew why I had to do it. I knew it was cheesy when I was doing it, and I did it anyway. Ok, whatever.”

I think this is incredibly revealing what Lucinda has commented, as it seems to explain why many of the recent Vogue covers have been a little lukewarm. Perhaps the pressure to bring in money and advertisers compromises the creativity and integrity of the magazine.

I personally love Lucinda’s fresh honesty about Vogue, and I hope that Schulman’s successor Edward Enninful, can bring Vogue back to what it used to be, a fashion bible for style fanatics. However it seems Lucinda will not be keeping up to date with the new issues of Vogue, quoted as saying;

“Truth be told, I haven’t read Vogue in years. Maybe I was too close to it after working there for so long, but I never felt I led a Vogue-y kind of life. The clothes are just irrelevant for most people – so ridiculously expensive.”

I can’t help but agree with the point that Vogue is aspirational rather than achievable, but maybe this is part of the appeal. Either way, with my Grandmother’s belt coming in at £12 from a reclaimed Vintage store, I have at least a little attainable piece of the “Vogue-y kind of life.” 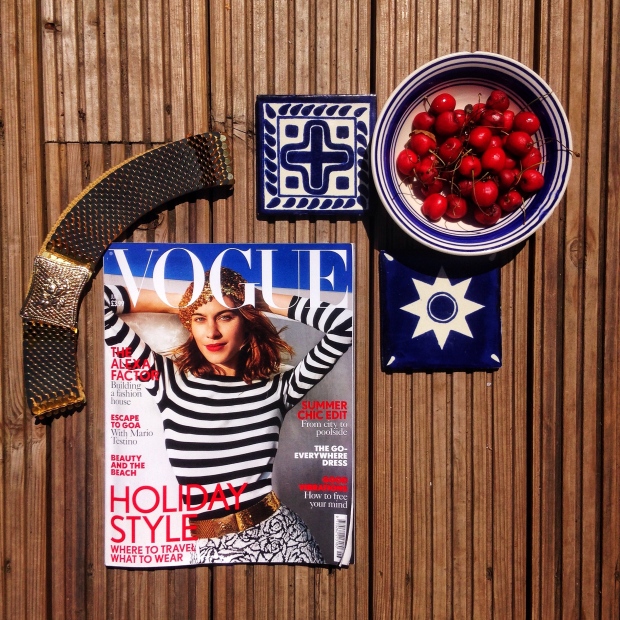 What did you think of the June cover of British Vogue? Let me know in the comments below!