Week seven kicked off on Monday when I emailed Jasmine from Find Your Intern, asking whether she could answer a few questions for us to use as content for the PXL blog. Kiran wrote eight questions, of which I re-worded a few and added two to the mix. Jasmine got back to me saying she would have to email her answers in the following week.

Tuesday was the day of our PXL shoot. Firstly, I headed to Ravensbourne to pick up two lenses and a reflector that I booked out from the CLR. There I met with Eden who was returning equipment from a shoot she did on the previous week. She had a bag holding all the clothes she had for the shoot, some of which she gathered from her own wardrobe and others she purchased from ASOS with the intention of returning them. She came up with the outfits herself as I have very little knowledge and passion for styling.

We then headed to Bank where we met with Christina, who was acting as an assistant and Valery who was acting as the model. After Valery changed into the first outfit in a nearby Pret, we began to shoot below the Lloyds building. At first, the shoot seemed to be going well, we were only in the first area of the building and we had seemingly got a few possible shots. We decided to move to a new section of the building with the intention of returning to the first spot if we needed. As we moved to the second area we didn’t even have time to shoot before security approached us. He asked if we had a permit to photograph here, to which we said no. He then informed us we weren’t allowed to take photos without permission as it is private property and asked us to leave. Immediately, I felt nervous, not for being reprimanded by security but for the fact that we wouldn’t be able to shoot at the building, and to be told this so early on into the day was even more distressing. 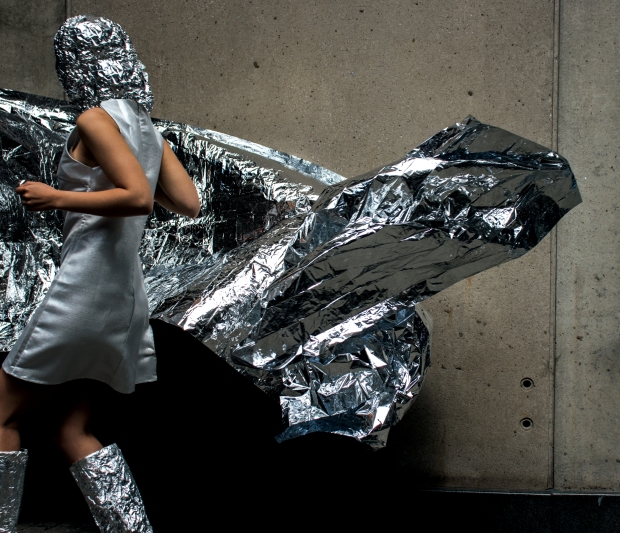 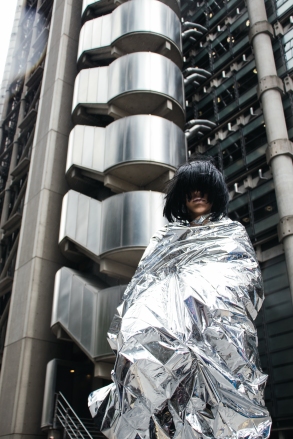 We decided to move to another part of the building which was less in view, however, the photos taken in this spot did not work at all. It was then that we got approached by security again who asked us to leave. This was incredibly discouraging to me as I had so many ideas on where to shoot below the Lloyds building and now we were unable to do them. We decided to risk it once more on the exterior of the building, where we quickly captured a few shots and ran away for lunch before security could approach us. After lunch, Eden got Valery to change into the second outfit of the day. We spent this part of the day photographing from across the road from the Lloyds building, where we got approached by security again for standing on a bench to shoot. Even though we managed to shoot in this area for a bit it was still so limiting and there were so many more subtle areas of the building that I would have loved to shoot at. After it began to rain we decided to head back and stop at Canary Wharf on the way. I had been to Canary Wharf a few days before and hadn’t found anywhere worth shooting so I relied on Valery and Eden who said they knew of some areas which may fit with the theme. After arriving at Canary Wharf, we wandered around for a bit before finding a long passageway/bridge/tunnel that appeared very futuristic and space-age like. Unfortunately, I found these pictures appeared way too contrived, as the background seemed too slick. As it reached the late afternoon, we decided to then make our way back.

After our day of shooting, myself and Eden went back to Ravensbourne to go through the images to pick our favourites, of which Eden then edited. Looking over the images, I wasn’t entirely happy with how they turned out, however, under the circumstances, I understand what went wrong and caused certain problems which affected the quality of the shoot. That being said, I also felt like the photos were alright and would be okay to present to the class the next day, despite my hesitation.

On Wednesday morning, I made my way into University with the photographs on my laptop. Initially, we received positive feedback on the photos, much to the relief of myself and Eden and I began to feel a lot more confident about the end result. However, after a talk with guest lecturer Stuart, we were left feeling deflated. He made the point that to him the images appeared hard and industrial and wasn’t in keeping with PXL’s branding. It was a good point that in hindsight I agreed with, but we had presented our ideas and concepts to the rest of the class in the previous week and no one had picked up on it. Also, I would say our final photographs reflected the imagery on the mood boards that were shown to the rest of the course. I also felt that the guest lecturer hammered his point home a little too hard, as I said numerous times that I understood his point and that we would come up with a solution. However, he continued to talk for quite some time until we all felt emotionally drained and downcast about the work we had presented.

It was then decided that the photos would be brought to the attention of the rest of the course, to see what they think. Although I acknowledge that this was necessary, it didn’t make it any easier, as myself and Eden felt our work was under an intense level of scrutiny and judgement. Some said they liked the photos, yet one person said they didn’t like the photos and I can’t help but wonder how many people didn’t like them but didn’t speak up. Of course, criticism of your work is something that we will have to get used to in the real world, however, what made this situation particularly difficult was the degree to which it was assessed. In the past, I have had work critiqued by one or two figures and there was always time to fix the mistakes made. To have thirty people crowding around your work, which in some ways will reflect them as an agency, was another aspect which made the circumstance especially uncomfortable and challenging. Due to this, I felt quite embarrassed and guilty that I was perhaps partly responsible for work that represents members of my course in a possibly negative light and that many others feel they could do the work better. Despite all this, I feel in some ways I needed to experience this level of pressure and responsibility so that I am prepared to deal with criticism in the future.

Stuart continued to stress throughout the day that he didn’t feel the photos were right for PXL, as he asked others if they had work that could be used instead. At this point, I felt I would prefer another’s work to be used as I couldn’t help but let the events of the day negatively affect my opinion of the photos, leading to me not wanting to see or think about them. Unfortunately, for Stuart (and perhaps myself) there wasn’t enough time to use any other content for the banners.

On Thursday, I went in to sort out the banner imagery, whilst Eden edited the photos from home to then send to me. After having an incredibly hard day on Wednesday, I didn’t feel Thursday would be much better, but I understood that I just had to grit my teeth and get on with it. After spending the day going back over the imagery and finalising the banners with some members of the branding team, I spent the evening alongside Joyce, cutting out and putting up posters around Ravensbourne which advertised the PXL event.

Although it was quite a gruelling week, I felt I learnt a lot and grew from the experience.